Stefan Strasser, Austria, lives behind a drawing table in Vienna, Austria. He makes his living as a comic artist, with “Chicken Wings” being the most important of his projects. Stefan never went to art school, but rather got himself something one could call a “decent education” (a master’s degree in international trade). His studies brought him for 2 years to Tokyo, Japan, and after that he decided to become a freelancing illustrator and designer, lest he would have to find a real job. His brother, Michael Strasser, USA, was born to two Austrian parents in South Africa, grew up in Austria, now lives in Las Vegas and works an adventurous life as a fire helicopter pilot. Mike could write a book about his work if he thought anybody would believe it. But ever since he created “Chicken Wings” together with his brother Stefan, it seems that with comic strips he has found a much more suitable medium to reflect on his life anyway.

Cartoons from Stefan can be found in:
-Good landing
-Going up, Sir
-Please wait to be seated
-First 100 years are tough 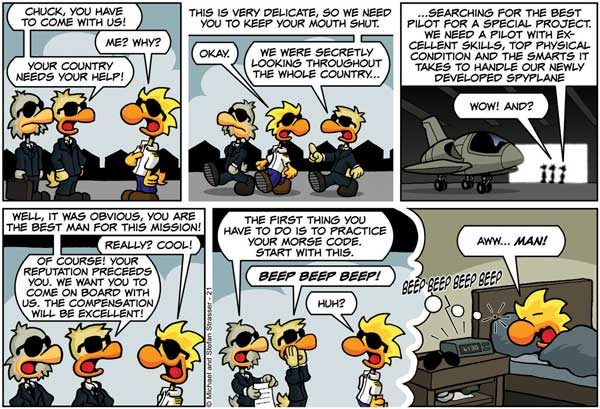